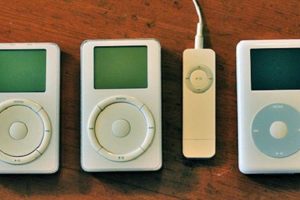 The capabilities of the new iPod video continue the developing process of the old capabilities – software, hardware and compatibility with other devices.

Concerning the software, it is well-known that the iPod in general and the iPod video in particular play MP3, audible audio book, WAV, M4A/AAC, protected AAC, AIFF and Apple Lossless audio file formats. Since the 5th generation iPods there is another possibility of playing m4v and mp4 MPEG-4 video file formats. Only non copy-protected WMA files may be copied to an iPod. Other formats are not possible to be played by the iPod and this is the case of FLAC and Ogg Vorbis formats.

Besides, the iPods are especially designed for matching the iTunes media library software. This online music store appeared in 2003 and it sells songs and it was thought exclusively for the iPod users and not for other portable music players. This may have contributed to the success both the iPods and the iTunes music store and to the great development and improvements of the iPod’s capabilities.

The software of the new iPod video has new features – personalized recommendations and video content that can be played on a Pc or transferred to the iPod. The software was upgraded to Version 6, fact that represents a development and a distinct achievement.

Compatibility of the iPods with Windows is the idea of Apple, realized in 2002, fact that contributed to the creation of a Windows version of iTunes in 2003. The iPods could be made to be compatible with a Macintosh and there is also an iPodLinux project.

Some additional features may be mentioned while speaking about the iPods in general and iPod video in particular. The iPods can display text files, fact which is very useful. There are also PDA calendars, some games that were interesting several years ago but they seem outdated nowadays. The games available on almost every iPod except the iPod shuffle are brick, parachute, solitaire, music quiz. The most interesting game is the music quiz, playing some fragments of some songs and waiting the user to identify the song from a list. The disadvantage of this game is that it uses a lot of battery power.

All these capabilities seem to be improved in the case of the new iPod video except the creation of other games or the introduction of new ones. This may be seen as a disadvantage, but if taking into account the fact that it is a case of a portable music player this aspect does not have such a great importance.

The innovation is of course the video capability, although the main features of the new iPod stress on great improvements in the image and sound quality. The video image is surprisingly smooth and in this way may replace the skeptical attitudes with joyful exclamations.

Although it is not the first attempt of bringing video on a portable handheld device, this achievement seems to be the most successful. This success is due to a lot of required work and complicated changes in the software and hardware as well. In a way or another, Apple seems to be the champion in creating special portable devices and maybe some other steps will be taken in the development of the small video portable devices. In this way, maybe a special compatibility with more devices may be developed, ensuring other periods of great success. Other online stores may appear and develop in the tradition of the iTunes music store. Due to iPods from the Apple Company legal content of the downloaded and paid music or TV shows, episodes or other materials is ensured.